Today at Brooklyn Brass & Reed a customer dropped off a Conn 10M tenor sax for repair. These saxes are also called the “Naked Lady Conn” They are called this because there is an engraving on the bell of a woman showing a little cleavage. The customer said that her husband had inherited it from an uncle who recently passed away. This is one of the horns from the C.G. Conn company‘s M series. Altos saxes were 6M tenor saxes were 10M and baritone saxes were 12M. This sax is a tenor and has a serial number of 266XXX. That would date it to 1935-36. approx. 88 years old. These horns are great players and you can find them for sale on ebay starting at around $800 or $900 up to $3500 or more. Of course it depends on the condition. These are very sought after saxes.

Some saxophones are brass that is polished to a high shine then it is sprayed with a clear lacquer. Over time there is a patina that is formed the lacquer darkens with age.This particular sax has been re- lacquered. To re-lacquer a saxophone all the old or remaining lacquer must be stripped off and then the sax is buffed out again.This removes a small amount of brass from the surface. You can tell this because you can see that the engraving on the bell is not as deep and as defined as a sax that has the original lacquer.After the buffing the horn is sprayed with a clear lacquer.Sometimes they add a tint to give it the look of aged lacquer.They even spray them different colors now. Re-lacquering is something I think most shops send out to have done. A shop may remove all the keys and pads, do dent work if needed then carefully pack the horn up and send it off to someone who specializes in re-laquering. Anderson Silver Plating in Elkhardt Indiana is a company that has been doing this for years. after the horn is lacquered it is sent back to the shop where it is assembled and re-padded.

Many people do not realize it but re-lacquering a saxophone devalues the instrument signifacantly. In my experience it will knock $1000 off the price. Professional players just don’t want them if they have been re-lacquered. That is usually a first question ” Is it original lacquer”? But some people just want a shiny horn.

This sax is in beautiful condition 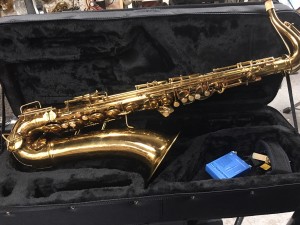 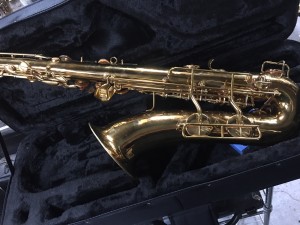 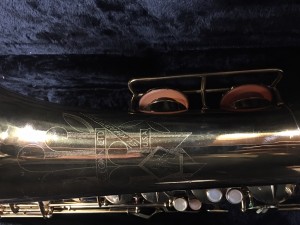 I know its really not possible to tell but in the photo of the bell the engraving is not as deep and defined as a sax with the original lacquer. The sax would probably sell for $1200-$1800. It is a very nicely done re-lacquer , all the dents have been removed if there were any .I can tell that the neck had some dents rubbed out. But over all it is in beautiful condition.

I replaced a palm pad and the lower stack, right hand keys were way out of adjustment. The right hand F key pad was falling out. There were leaks on the bell keys too. It’s all playing fine now.

These saxes were kinda the industry standard until the Selmer company came out with the Mark VI saxophone. In 1998 Conn Selmer merged.

The customer is going to give this to his son who is just learning to play sax. I hope he takes care of it so it will be around another 88years.