Jackie McConnell is back in Brooklyn. Jackie just finished serving 22 years and 10 months in a federal prison. He was arrested in Virginia in 1993 for possession of cocaine. There is something wrong with the system when you can lock someone away for that many years. Jackie stayed strong through all the years in prison. He is not religious but believes in a higher power. He taught himself saxophone and wrote a number of books. One of his books Chameleon is available on amazon.com

I met jackie through a reverend Hollis from Pennsylvania who heard that Jackie, rather than take the sax he learned on in prison left it for the “next guy” Jackie said “this sax saved my life I’ll leave it here for someone else to use”. Reverend Hollis heard about this and bought Jackie a Martin saxophone and paid to have it overhauled at Brooklyn Brass & Reed. All new Pristini pads installed on Jackies “Martin Indiana” alto sax.

Jackie has been back to the shop a few times for adjustments and the last time he was here I gave him some saxophone transcriptions.One I did on Sonny Stitt and one of Paul Desmond. He was very appreciative. He is just glad to be out of prison he says that he is just trying to get his life back together.He is living near my shop at a half way house. He says that it is still a form of imprisonment because he has a curfew and can just work at his job then he must report back to the half way house. Not a lot of freedom. jackie drives a bus that takes people to casinos.

We are having a labor day/BBQ party on Sunday and Jackie said he is going to stop by for a couple hours. I told him there would be other musicians here. Mahlon Hoard a fine saxophonist and painter will be here. Also Joe Bamberg a pianist and programmer for Eventide will be here playing some ska/reggae/dub. jackie said he would love to meet some new people.

Keep your ears open your gonna hear about Jackie McConnell. His books are Sci-Fi and he really has a wonderful imagination. I want to get him over here to play. He says that he will make it to the next performance of redrube & the Allstars at Franks Lounge on September 29th. 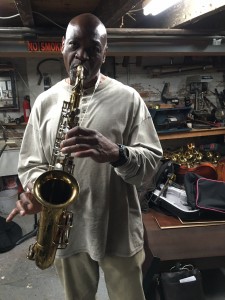