Hello folks. I have been a little busy lately. Have not posted. BUT I’M BACK! 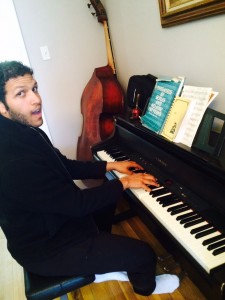 John Lander came by the shop a week ago or maybe it was a week and a half ago. It was a real pleasure to meet this kid. I say kid because he almost 40 years younger than I. He has a genuine positive groove going on. John saw an ad for a bass I was selling and first called me about it.Then he texted me. Now at the time I was thinking about my brother John who passed away in February. And so when I got a text that said “hey brother this is John” I was was hoping it was by bro contacting me from beyond. But then the text went on to say “I’m the person who inquired about the bass”. Well anyway that’s how I met John Lander. he came over to Brooklyn Brass & Reed to check out an upright bass I had for sale. 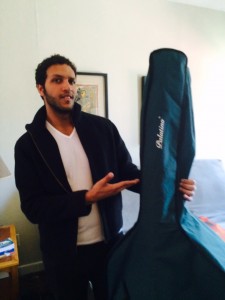 John grew up in Brooklyn and started playing piano at a very young age. He studied at Julliard early on in his musical career through a special program. He is a very talented musician. John has a regular gig at Caffe Vivaldi  in the west village he plays from 9-11pm on Sunday nights. Go check him out you won’t be sorry. Well anyway John  bought the bass from me and told me that he will be playing it at Washington square park. I heard him play the bass and he definitely can get around on the instrument. He is truly a beautiful cat and I hope to use him in my band sometime. While he was here he took a look at some of the redrube charts and I could tell he would be someone I would call for a gig.  God bless John Lander and god bless NYC and the Mets.