Richard Braithwaite fine saxophonist and  a regular customer at Brooklyn Brass & Reed, he is also a very good friend of mine. We met about 20 years ago when we worked at Frederick H. Weiners. Rich brought his soprano sax in for a minor adjustment today. He plays vintage Martin soprano sax and a vintage Buescher Aristocrat tenor sax. Rich has his own group, The Richard Braithwaite Quintet. You can see it on youtube 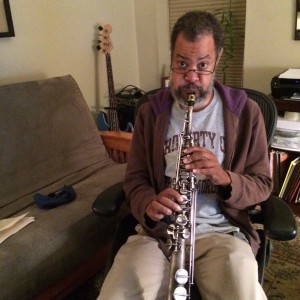 Below is a short bio on Richard Braithwaite

Richard Braithwaite is a Queens, NY native and a product of the New York City Public School System. He learned to play the saxophone from aa neighbor across from Baisley Park, Barbara Hunter. He played in his home church Community Full Gospel Church in the Bronx. Later he played at Sunday services at Community Full Gospel Church in the Bronx. Later he played at Sunday services at Community Bible Church in Lawrence, NY.In 1983 he received a diploma in Jazz and Popular Music from the Hartford Conservatory Of Music And Dance. 1988 saw him start at KingsboroughCommunity College as part of the Local 802/CUNY Baccalaurate Program and graduate with a B. S. Degree in Music Performance in 1992. He started teaching in the New York City Public School System as a General Music Teacher and band teacher at August Martin High School in1996. After moving to Springfield Gardens High School in 1999 and moving back to August Martin in 2005, Richard left the 2007. After that he worked with a rehearsal band lead by NYC educator Bill Stevens. He also received a Master’s Degree in Music Teaching from Teachers College/Columbia University in 2001 while teaching full-time. Richard has worked off and on with the Jazz Unlimited Orchestra and was a part of countless jam sessions at the former Carmichael’s Diner and Manhattan Proper Cafe.At the beginning of 2011, Richard formed the Richard Braithwaite Quintet and performed at the Austin Street Fair, Ascension Church (both in Forest Hills, NY) and Joe Solomon’s Music Studio in Manhattan. This group performs original music that Richard has written over the last 25 years He still works with the Jazz Unlimited Orchestra, plays on Sunday’s at First Church Of God, Far Rockaway, NY where he has been a member for 24 years, is the leader of the St. Albans VA Jazz Workshop since 2012 and has worked with Instrumental Sounds Of Praise (ISOP) since 2013. He likes various styles of music including old R & B (with a special affinity for the Sound of Philadelphia) jazz, gospel and classical music.